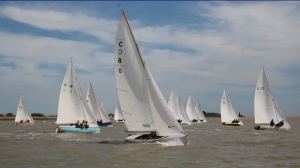 The 2014 BOD Racing Programme is now available online so go check it out and get your diary marked up!

In particular please put the evening of Saturday May 10 in your diaries as this will be the BOD Dinner at Brightlingsea Sailing Club.  Full details will be published shortly but save the date right now as it promises to be a great evening.

We’re expecting good turnouts at all the events next year, but as always the highlight of the year will be Pyefleet Week which runs from 9 to 16 August with the President’s Trophy on Sunday 10 August.

After Pyefleet Week 2013, when we had 20 boats on the water for the President’s Trophy, Malcolm Goodwin joked that we’d have to aim for 25 boats in 2014.  At the time he thought he was being a bit ambitious, but with 2 new fibreglass boats due to launch in the spring, Grethe (the first glass boat) now back in Brightlingsea, plus several boats in restoration or being brought back into commission for racing in 2014, this is now a very achievable goal.  Let’s all work really hard to make it 25 boats for the President’s Trophy.  In turn that will mean we should see 20+ boats racing the whole of Pyefleet Week – bring it on!