Invitation To The Launching Of C54 Storm Petrel 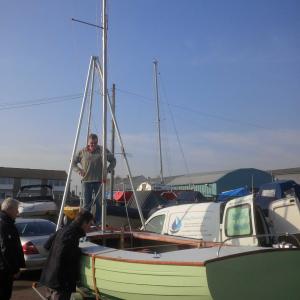 Alan Hicks invites you to celebrate the launch of Brightlingsea One Design (BOD) C54 Storm Petrel at 2.30pm on Saturday 19th April (Easter Saturday) 2014 at The Hard, Brightlingsea, Essex.

Storm Petrel is the first new BOD to be built in several years and is number one in a series of four new boats that will be launched during the coming year, a year which will also see several more restored BODs return to racing.

As well as an opportunity to inspect Storm Petrel guests will be able to meet representatives of the BOD Class Association and the builders and key suppliers involved in Storm Petrel’s construction including Rob White of White Formula, Simon Hipkin Boatbuilder, and representatives of Sailspar and One Sails. BOD restorer Rob Maloney will also be on hand to talk about his current restoration projects, along with Malcolm Goodwin whose personal commitment to the survival of the BOD has been the driving force behind the class’s revival success.

Weather permitting several other BODs will be joining Alan for his inaugural sail and any guests or members of the press keen to try sailing a BOD will be welcome to step aboard for a short trip around the bay. To RSVP and reserve a sailing place please e-mail fiona.brown@fionabrown.com