The eagerly anticipated launch party for Alan Hicks’ new Brightlingsea One Design C54 Storm Petrel more than met expectations, with more than 100 friends, family and BOD supporters present at The Hard in Brightlingsea on a blustery but sunny Easter Saturday afternoon to observe Storm Petrel’s launching and maiden voyage. 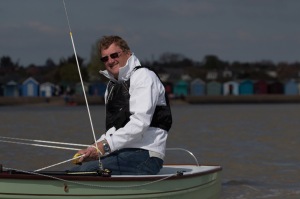 Alan kicked off proceedings by thanking those who had been involved in building and preparing the new boat.  In particular he highlighted the contributions of Rob White of White Formula, who moulded and assembled the fibreglass hull and tanks, Simon Hipkin, who fitted the wooden decks and all the joinery elements, and Malcolm Goodwin – the man largely responsible for the current revival of the BOD Class – for all his sage advice and technical input.

Alan then handed over to Alice Davies, Commodore of Brightlingsea Sailing Club, and Graham Chasney, Commodore of the Colne Yacht Club, whose entertaining double act highlighted the ongoing importance of the BODs to both of the clubs and to the community as a whole.

Alan then introduced his daughters Laura and Sarah who were to name the boat, and his son Rob who would help with her inaugural launching before inviting everyone to help push the boat down onto the hard. 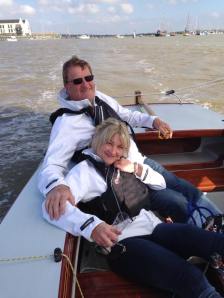 With the boat duly in position and hooked up to the tractor Laura and Sarah performed the traditional naming and blessing before spraying Storm Petrel in champagne as the crowd raised their glasses to toast her. Rob then helped the Brightlingsea Park and Ride team to launch her.

Once afloat Alan and his regular crew of Craig and Jayne Bond rapidly made sail and executed an elegant departure from the dock to three rousing cheers from the crowed.  With the sun gleaming off the varnish and the spray flying in the brisk breeze she made a lovely sight as she sailed away down Brightlingsea Creek.

Joining Storm Petrel for her first sail were two further BODs, C53 White Magic and C52 Grethe, whose crews were made up of people keen to try sailing a BOD for the first time. The three boats looked spectacular as they sailed up and down the creek, calling into the Colne Yacht Club pontoon periodically to change crews.  By the end of the afternoon Alan had sailed not only with his regular race crew, but with all three of his children too and the grin on his face said it all.

Whilst the boats were careening up and down the creek the non-sailing guests enjoyed a wonderfully relaxed afternoon sitting ashore in the spring sunshine from where they had a birds eye view of the sailing and could enjoy a celebratory glass of fizz or two.  There were BOD balloons for the kids and plenty of opportunities for visitors to speak to the builders, suppliers and other members of the BOD fleet about the boats and their activities.  All in all the day was declared a resounding success for Alan and everyone else involved.

The onboard photographs accompanying this piece were taken by Craig Bond and the other photos are by official photographer Tim Bees, whose full gallery of images can be viewed at his online gallery.  Thanks to

both Tim and Craig for such wonderful shots.

We have two more big launchings coming up this year of which more news shortly.  Malcolm Goodwin has confirmed that he will be relauching C4 Cormorant after her full restoration on Saturday 19 July at Brightlingsea Sailing Club at 18.00 when all fleet members and anyone interested in the BODs will once again be welcome.  We are also looking forward to the launching of this year’s second brand new fibreglass boat, James Anderson’s C55, which will be afloat in time for Pyefleet Week (launch date will be published here as soon as we have it).

1 Response to A Perfect Day For Storm Petrel’s Launching