Brightlingsea Regatta Racing Round Up

What a great weekend of BOD racing!  Two days of glorious sunshine and warm breezes plus the backdrop of the newly reinvigorated Brightlingsea Town Regatta made for a perfect BOD sailing opportunity.

On Saturday it was the turn of Brightlingsea Sailing Club to host the racing and the BODs took part in the annual Three Creeks Crawl all in handicap, sailing from the BSC start line, out and into Ray Creek (behind Second Beach) and then back past Brightlingsea and up both Flag and St Osyth Creeks (competitors choose which to round first).  With five BODs on the line is was a spectacularly close start and the boats were neck and neck all the way round the turning mark in Ray Creek and back into Brightlingsea Creek.  As they sailed past Brightlingsea Hard Chris Matthews, temporarily sailing C43 Endeavour on loan from Nick Readings while he waits for the new rig for C27 Rebel to arrive, had slipped into the lead with Dan Willett in C9 Bidi second, Alan Hicks in C54 Storm Petrel third, Mark White in C53 White Spirit fourth and Fi Brown in C51 Grethe fifth.  At the break point where the crews had to decide whether to tackle Flag or St Osyth Creek first Endeavour and Bidi went left up Flag and the other three headed right for St Osyth.

As the fleet came together again in the Cindery channel it was clear that those who went for St Osyth had done better with Storm Petrel and White Spirit ahead as they swopped channels.  But it was close stuff as as the boats came together foar the final run down to the club line.  Alan Hicks showed the youngsters in Endeavour that there are times when experience really counts and romped home to victory by 3 minutes.  Endeavour, Bidi and White Spirit crossed the line in that order with just 22 seconds between them as the girls in Grethe trailed in behind them for fifth place.  The five BODs also filled the first five places on handicap too so a good day’s work all round.

Sunday’s Hickley Tiller from the CYC’s Batemans Tower line saw the fleet back on a more conventional round the cans course with Nick Readings and Marilyn Hempstead officiating as Race Officers.  With nine boats out the line was quite busy and for White Spirit at least not quite long enough as they found themselves making as one with the sea wall in front of the Tower just as the gun went. Fortunately they extricated themselves pretty smartly and were soon off after the pack. 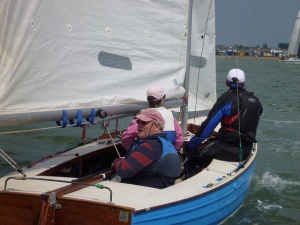 Adrian and Judith Gibbons’ C31 Blue Peter was called OCS but failed to realise their error and did not return.  Grethe made the best start and a couple of tacks later was heading the fleet and making the most of the clear air to slowly gain distance.

Off the line Storm Petrel was a long way off her usually blistering pace.  Alan had been complaining about difficulty steering the boat before the start and they had looked at the rudder but couldn’t identify the problem.  Matters weren’t helped when bowman Craig Bond thumped his kneed very badly in a tack just after the start putting him out of action for a few minutes.  Alan initially suggested they pull out and go home, but having recovered a little Craig said he’d go take another look at the rudder.  This time the rudder had swung up a little and lo and behold Craig discovered that Alan had forgotten to remove the protective sleeve they put on the rudder ashore and they had been sailing around with what is effectively a sleeping bag on their foil.  Sadly for them the entire Newman family were out spectating in Dug and perfectly placed to observe this highly entertaining discovery ensuring that no cover up was possible! Having removed the offending cover the boat miraculously regained her performance and set off after the fleet.

As they came round the first mark the Grethe girls had opened up a nice lead and looked well set up for the run.  Unfortunately the unexpected sight of the entire fleet behind them left Fi so over excited that she managed to trip herself up on her own toe straps and badly sprain her ankle.  It took a few minutes before her crew managed to pick her up off the cockpit floor and sort themselves out which allowed  Danny Fox in C8 Egret and Endeavour to sail around them.  Having decided the ankle wasn’t broken the girls hoisted their kite and managed to hold third place on the next two legs to Batemans.  But as they came onto the second lap Mike Hempstead’s C18 Gelesma slid through them to leeward and then their problems in getting Fi across the boat on one leg caused them to forget the need to go back through the gate and so they decided it was time to head in and get Miss Hop-Along some ice for her ankle.

That left Egret, Endeavour and Gelasma in a final dog fight for the trophy.  Egret was looking good as they came around Batemans and set off on the second lap.  They would have looked even better if they had rounded the mark to port, as called for by the course card, and not to starboard. Having been advised of their mistake later in the race the boys tried to exonerate themselves by doing a penalty turn, but this was not adequate and so they had to retire post racing.

Meanwhile White Spirit had be quietly creeping up on the leaders after a somewhat lack lustre start.  They had played the tidal advantages to the hilt and on the second lap showed both smart tack ticks and blistering speed to sniggle their way through the pack.

After racing the teams gathered for a well deserved post race refreshment on the Yacht Club’s sun drenched balcony and the prizes, including the historic Hickley Tiller were presented by Colne Yacht Club Commodore Graham Chasney.

Overall the Regatta Weekend was declared a resounding success by all!