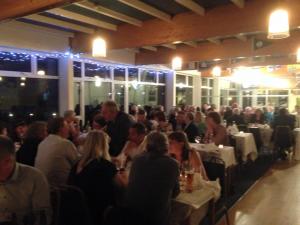 We had a great turnout and lots of fun at the 2015 BOD Dinner, which this year was hosted by the Colne Yacht Club and organised by Mark Wilby.  Mark did a fantastic job of putting the event together and the evening was the perfect kick off to what promises to be another full-on season of BOD Racing.

During the pre-dinner drinks and again after dinner, local singer songwriter Adam Cowlin did a fantastic job of entertaining the guests. Kristy and her team in the galley produced a fabulous four course meal which everyone agreed was superb while Matt and the bar staff kept everyone well refreshed. 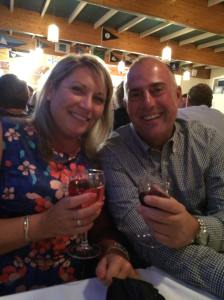 On arrival CYC Commodore Graham Chasney welcomed the fleet to the club, highlighting how proud the club is to be associated with the fleet and how much they are looking forward to being part of another great season of BOD racing, after which Graham’s wife Frances said Grace.

After dinner it was the turn of BOD Chairman Bob Richardson to speak and he paid tribute to the incredible commitment and support of Malcolm Goodwin, whose hard work laid the foundations for the revival of the BOD Class we see today.  He also thanked the volunteer committee members and all of the owners and sailors of the fleet for their dedication to making the class what it is today.

He particularly thanked Nick, Pam and Richard Readings for again volunteering to act as Race Officers for the CYC BOD racing this season and Marilyn Hempstead, who is stepping down from her role as regular race officer but who will still be supporting the race team from time to time.  Without their dedication and commitment we would not be able to enjoy such regular racing and we are hugely in their debt.

New members were welcomed to the fleet including Adrian and Sue Bouckley with the new C50 Eider, Richard Austin whose C44 Janice will soon be back afloat after full restoration, and Graham and Claire Bridle who now own C31 Blue Peter. We also look forward to the relaunching of Mark Wilby and Phil Holding’s C75 The Mike, which is already at Park and Ride and looking fabulous.

Richard concluded by reminding us all that the first official BOD race is the Deputies Cup Handicap from BSC at 14.00 on Bank Holiday Monday 4 May and that Thursday night racing starts on 7 May.

Mark Wilby rounded out the evening’s formal speeches with a quick reminder that coming up this year we have Mark & Marianne White’s annual BBQ, a Pimms Garden Party to be hosted by Alan Hicks and Fi Brown, the return of the legendary BOD German Night on the Monday of Pyefleet Week, the Final Fling lunch after the last race of the season on 11 October and finally the BOD Halloween Party at CYC on Saturday 31 October to close the season in style.