The first leg of the two race Cormorant Cup series took place on Sunday 24 May and saw seven BODs come to the start line in a light west north westerly with occasional rain showers.  The start proved to be a somewhat confused affair as the fleet struggled to get to grips with the new BSC lights/numbers starting system (note – we have asked for clarification on this and will be posting more info shortly).

With no one really knowing when the start was it truly was the luck of the draw that saw Chris Matthews, helming Fi Brown’s Grethe, get the best start of the fleet.  Danny Fox in Egret and Malcolm Goodwin in Jean were next best placed to get over the line in reasonable order, but for Mark White in White Spirit, Alan Hicks in Storm Petrel, Mike Hempstead in Gelesma and Trevor Stone in Ruff it was a case of scrabbling to get back to the line to start once everyone realised what was happening.

It was close hauled out of the Creek hardening up into a reach and then latterly a close spinnaker reach out to Beach, but with the flood at half tide judging the best course around Point Clear was tricky.  Most of the boat’s touched at least once getting out of the Creek, but Storm Petrel hit hardest and took a couple of minutes to extricate themselves as they were so close inshore.  By this stage they were at the back of the fleet and forced to play catch up.

At the front of the pack Grethe was working hard to hold off the constant advances of both Egret and Jean.  They hung on round Hills and back to Beach but on the second beat to Hills Grethe and Jean tacked off early onto port and Egret stood on.  At Hills Egret rounded just head with Grethe second and Jean third. 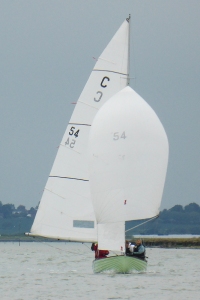 Coming up the Creek and into the turning mark Grethe had to vigorously defend her second place from the attacking Jean, giving the spectators onshore plenty to watch.  Their antics allowed Egret to extend her lead a little and she took full advantage of her clear air on the final short lap out to No 12 and back to win comfortably.

Whilst Egret might have been quite relaxed on the reach home, the same could not be said of the crews in Grethe and Jean who virtually match raced around the final lap.  Behind them Storm Petrel was gaining ground and they must have been hoping for another lap to give them extra time to catch up and perhaps even overtake.

It was not to be though and as the fleet came up the creek Grethe and Jean were nose to tail with Malcolm Goodwin using all his decades of hard earned experience to try to edge Jean past the young whippersnapper Chris Matthews in Grethe.  Malcolm did everything he possibly could and as they came to the line the boats were overlapped with Jean starting to pull forward on Grethe.  Everyone held their breaths and Grethe’s crew were hugely relieved that the line arrived just before Jean could slide past them.  Definitely the best BOD finish of the year so far.

After her disastrous start Storm Petrel had sailed incredibly well to pull up into fourth place with Gelesma fifth White Spirit sixth and Ruff seventh.

Our thanks to Ed Gibbons and his helpers in the BSC Race Box and to all the rescue boat crews for their support in providing the racing.