Wow – What A Week That Was!

What an incredible week of sailing Pyefleet Week 2015 supported by Zhik provided for our fabulous BOD fleet.  At 23 strong it was the biggest turnout ever and the quality of the racing just keeps getting better and better.

From the outset it was clear we were in for an amazing regatta and with a perfect mix of weather conditions with something to suit everyone, the entire fleet certainly gave their all and enjoyed some truly extraordinary races.  Wherever you looked in the fleet there were constant battles going on so whether your fight was for first place, to make the top ten or above half way, or simply to beat your nearest rival each day, there was incredible racing to be had.

At times it was a little too neck and neck and steps are already being taken to carry out a full review of the Pyefleet Week courses for 2016 so that we can still achieve great racing, but hopefully avoid some of the high stress moments caused by very short start lines (exacerbated by the lack of water) and some extremely close mark roundings (particularly the first few marks when the fleet was still so closely packed).  I’m relieved to say that whilst there were a few collisions and some damage no boats were prevented boats for continuing to race.

Going into the week it was hard to pick a favourite and any one of at least half a dozen teams could easily have taken the title.  After three straight years of victories Jeremy Newman, crewed by Ollie Newman and Pier Lambert, did his very best to make it four in a row, but it wasn’t to be and this year’s final race showdown was between Malcolm Goodwin, crewed by Graham Sanderson and Georgina White, and Dan and James Willett and Fraz.  Both teams raced their socks off, but Malcolm’s wily experience gave him the upper hand and having sailed his rivals down the fleet he kept a loose cover on them as he sailed into second in the race and first overall.  Dan and his boys took the silver medal with Jeremy and co picking up the bronze.

Elsewhere in the fleet there were plenty more impressive achievements to report.

David Conlon, Sarah Bines and Mitchell Bond borrowed Endeavour from Nick Readings and a set of old sails from Alan Hicks and sailed like demons to finish seventh overall.

Sue Bouckley, crewed by Simon Hipkin and variously her daughters Abbi and Hannah Stodel and John Paxman, were racing the brand new Eider in her first ever Pyefleet Week and proved that they have great potential for the future with a ninth place overall and some very impressive boat speed.

Malcolm Goodwin had kindly lent Jean to the WOD boys with George Brown on the helm and Nic Blower and Rob Maloney crewing.  This was their first BOD sailing and they put in a really steady set of results to finish 15th overall.  We hope we’ll see you all back in the fleet again soon boys!

Also in a borrowed boat and racing for the first time was Robin Cole, crewed by his wife Theresa and Roger Robertson – who brought more than a wee bit of BOD experience to the team.  They raced Nick Reading’s Nan and got stronger and stronger as the week went on so we do hope we will get to see more of this team in the fleet in the near future.

Graham Bridle, Imy Hare and Claire Bridle put Blue Peter through her paces and it was only on a couple of days, when the wind was particularly strong, that Claire – whose mobility is severely limited by her MS and who sails sat in a specially adapted chair – had to step out and they brought in a replacement.  Their best result of the regatta was a sixth in the second race and despite not competing in the final race they still took 16th overall. 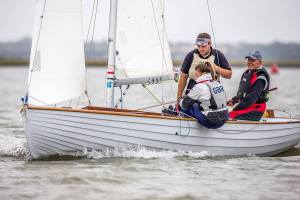 Making a very special appearance in the fleet on Big Wednesday was world renowned yachting journalist and all round yachting legend Bob Fisher, who at 80 years young showed that he still has what it takes.  Crewed by grandson Chris Matthews and Jessica Rust in Rebel, Bob showed the rest of the fleet a clean pair of heels and was first home so convincingly that even when the tide caught them just after the finish and they had so little wind they were forced into a glancing collision with the committee boat, they still had time to take their penalty turns and recross the line before the next BOD finished.

It was also good to see Geoff Gritton at the helm of a BOD on Big Wednesday with Chris and Emma.  Geoff’s new BOD C56 is just about to go into production at White Formula so we’ll look forward to seeing him on the water in his own boat next season.

But the sailing is only half the Pyefleet Week story and once again the BOD German Night on Monday was one of the highlights of the week.  Lederhosen, dirndls, steins, bratwursts, the alway fabulous Oompah Band and of course the galley girls with their legendary jugs all made for a great night which far too many of us can only vaguely remember.  Plans are already in hand for BOD night 2016 and whilst we are sworn to secrecy rumour has it that you might want to start saving old plates and practising your Greek dancing.

Of course none of this would have been possible without all the fantastic volunteers who manned the committee and rescue boats, kept us fed from the galley and watered from the bar, ran the race office, did the results and generally looked after us all week.  There are far too many names to mention anyone individually, but thank you one and all for a great job well done.

Thanks to to everyone in the BOD fleet who stepped up to volunteer for a rescue boat or OOD duty, helped to move tables in the club and helped to run BOD German Night.  The club and Pyefleet Week is entirely volunteer dependent so well done for making sure the BOD fleet pulled it’s weight.

Thanks to everyone who took photos of the BODs during the event.  In particular check out the galleries of Dave White and Katie Holland at the Pyefleet Week website. 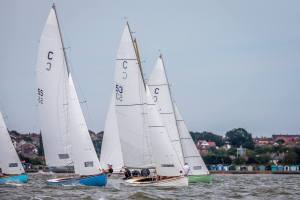 Finally a special thanks must go to Nick and Pam Readings and the Park and Ride team who not only made sure the dry sailing boats all got launched and recovered promptly, but lent out two BODs to new crews, provided two dedicated rescue boats free of charge, ensured the BOD high volume pump was afloat every day and found volunteers to man everything for the duration of the regatta – oh and sponsored our President’s Race Day on Sunday.  Thank you guys – we really appreciate it.