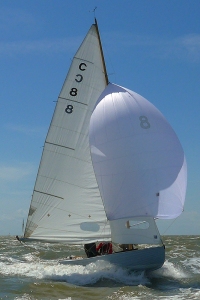 The second miniseries of the season was greeted by warm, sunny skies, a NW 6-12 knots and many many wind shifts. Nine sparkly BODs made their way out to the race course, fresh from their aprés Pyefleet week breaks. Two of the BOD regulars were away battling at Bosham Classic Boat Regatta scoring respectable 3rd and 4th places overall and being separated by a measly 0.5 points!

Nick Reading’s committee boat set a start line just off of second beach providing a long beat with the tide to No. 13. Each of the three races consisted of two windward leeward legs, taking approximately 30 minutes per race.

In race one, John Payne, crewed by Lucy and Fraz won the pin end and headed out to the left hand side of the course. After a significant left hand shift during the first upwind, this gave them a sizeable lead around the first windward mark. Keeping the rest of the fleet at their transom for the remainder of the race and scoring the first win. The remainder of the fleet was closely fought with David Conlon, crewed by Ed and Mitch, sneaking around in front of the pack to come second, followed extremely closely by Mark White in 3rd and Danny Fox in 4th. Finbar Anderson gained a 5th place in his debut miniseries as a helm. All nine BODs finished within 5 minutes of each other, giving an idea of the competitively close racing in the shifty conditions.

Race two began with a fight for the pin correlating with a considerable left hand shift C8, C11 and C53 struggled on starboard tack to cross the pin, allowing C43, who was to windward, to roll them across the line and take the lead on the first upwind. Downwind, C11 was able to catch up to C43 and call for ‘room’ at the leeward mark, but an iffy mark rounding allowed C43 to sneak inside and continue to lead to the 2nd windward mark. The final downwind presented a number of place changes as the wind became extremely fickle, C11’s tangled spinnaker left them victims of a C8 roll. At the finish line, the top three boats were approaching the line together, Egret gaining the win followed by Grayling then Endeavour. Behind this, Mr Hempstead and team used their impressive downwind speed to propel themselves to 4th place.

The third and final race was again pin end biased and won by Endeavour, who hit the left hand side of the beat to come out with slight lead at the top mark. Gelasma rounded 2nd, followed closely by the other seven. Mr Hempstead again managed to turn on the downwind accelerator, taking a closer line to the shore and presenting himself with a reasonable lead by the leeward mark. John, Lucy and Fraz had managed to gain 2nd by this point and Endeavour followed in 3rd, however hitting the bouy left them to do a 360° losing this position to Egret. A storming upwind gave Egret the lead by the top mark which they held to the finish, followed by Gelasma, then Grayling and Endeavour. This gave C8 the overall win from C11 on countback through number of firsts over the series.  The winner of this series will receive the CYC Colne Salver Trophy as that race had to be cancelled earlier this year due to strong winds.

Thanks must go to Nick Readings and his committee boat team for a glorious afternoon of sailing. Comments among the fleet highlighted the excitement and fun surrounding the miniseries set up, allowing crews to spend more time on the water battling throughout the fleet.