A belated congratulations to our 2016 Pyefleet Week BOD Champions Jeremy Newman, Piers Lambert and Ian Newman/Pete Kyne for a superb performance in what was a fantastic week for the class. 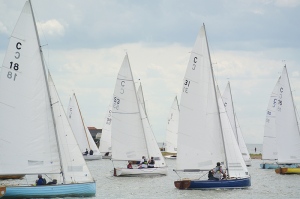 It was a week that brought just about every sailing condition and some amazing racing for the 21 strong fleet. We even had a bit of drama when, for the first time in three decades of BOD sailing, Steve Heppell put in his first BOD capsize and did so in the creek giving the spectators a grandstand view. Huge thanks must go to Nick Readings and in his team who came to Aina’s rescue in the BOD rescue boat with the high speed pump and to Gary Constable for coming out in Malice to help tow her home. Fortunately Aina was back out and racing the next day with the only damage being to the crew’s pride.

As always the week provided incredible racing for the entire fleet with battles going on at every level. Whilst Jeremy and the Avocet crew won with a day to spare, the dog fight for the remaining podium places was a humdinger and went right down to the wire with Danny Fox’s Egret, Phil Rust’s Dulcet and Chris Matthew’s Reble all in the frame going into the final day.  With a win in the final race Phil Rust, crewed by son and daughter Chris and Jessica, jumped up the leader board to claim second, while Chris Matthews and Egret both had their worst results of the regatta and had to be content with third and fourth respectively.

Huge thanks must go to the entire team at BSC for putting on a great regatta and to all the volunteer race officers and patrol boat teams who gave up their time to run the racing for us.  Thanks too to all the BOD sailors who volunteered to run the racing or man the rescue boats for the other side of the week, the event is run entirely voluntarily and its great that we have such a strong group of race officers, mark layers and patrol boat teams in our fleet to support this.