BODs and WODs Have Fun In Aldeburgh!

Posted on September 5, 2016 by fionabrown

Thank you to Aldeburgh Yacht Club for putting on such a great Classic Boat Festival over the weekend of 3 and 4 September 2016.  Three BODs and two WODs made the trip from the River Colne to take part and were warmly welcomed by the Aldeburgh team who could not have been more helpful. Launching the boats was easy with options to self launch from their ramp or use their crane and launching cradle to save dipping your trailers. Once afloat the boats were kept on moorings and the club launch 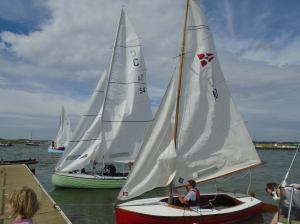 service ran you to and from the jetty. The local team also took the time to chat to the visitors to help familiarise us with the local geography and location of the marks, tide, etc.

The plan had been for two races on Saturday and one on Sunday but the tail end of a tropical storm made for some spectacular and very challenging conditions.  All of the Colne boats race in the opening race which was run in a blustery 18 to 25 knots. The entrants were 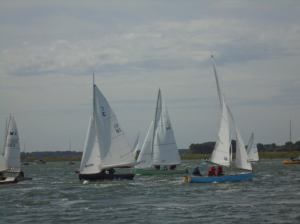 divided up into four fleets this year, the local Loch Long fleet (a lovely old two man keelboat), the keel and dayboat handicap (including the BODs and WODs) and a fast and slow dinghy fleet.

The club is located on a right hand bend in the river so careful course planning allows for a combination of windward, leeward and reaching legs in almost any wind direction with the majority of the courses being fully visible from 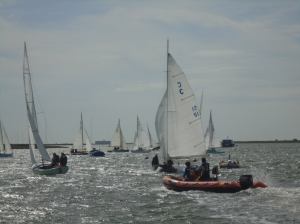 the club – perfect for spectating.

Race 1 called for a nice beat off the line heading south down river against the flooding tide. The first mark turned us back downwind, past the club and around the corner for a reach up and then back down the river with the first lap being completed by passing the club again where you came back onto a beat for the second lap. For those who haven’t been there its a bit like racing around Bateman’s, Pyefleet and Alresford 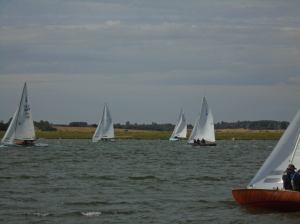 Creeks but with the added excitement of lots of moored yachts to avoid and lots of fellow competitors to play cat and mouse with. The tide is strong too which makes judging lay lines on marks and moored obstacles even more crucial and with marshy mudbanks either side there’s lots of guess work and lifting and lowering of centre plates as you try to decide how close to push it when going against the tide.

Alan Hicks, Craig and Jayne Bond in Storm Petrel got race 1 off to a flying start and sailed an absolute blinder to finish more than four minutes ahead of Fiona Brown, Julie Cuthbert and Martin Rhodes-Schofield in Grethe with Mike Hempstead, Max Hickman and Peter Adkins in Gelasma third BOD.  The fleet also included two classic Dragons, two classic Flying Fifteens, the two WODs and a lovely one off classic keelboat.  Unfortunately back ashore we discovered that Storm Petrel had misunderstood the location of the start line (marked by black and white poles on the far bank and the

start box on the club side) and was OCS. Mike reported that Gelasma was actually just over too but was aground at the time and drifted back behind the line as they freed themselves so ended up making a reasonable start.  On handicap one of the Dragons took first place, Grethe was second, a Flying Fifteen was third and Gelasma was fourth. Moral victory lay with Storm Petrel though as their corrected time would have put them more than two minutes ahead of the winner.

As race one concluded the breeze began to build even further with some really nasty gusts of around 30 knots under the dark scudding clouds.  The BODs picked up moorings and dropped their sails to see if it would blow through, but by the time the race committee called the fleet under starter’s order for race two it was clear the wind was not going to drop so we all decided that discretion was the better part of valour. Back in the bar each of us had stories to tell of near capsize with all three boats coming close to 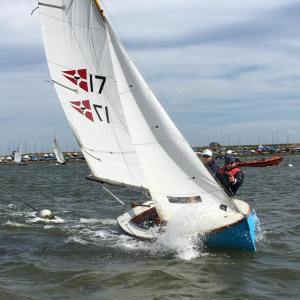 rolling it in on the scary dead run (at least half of which seemed to require sailing by the lee) and Grethe also scooping up more water than was strictly necessary in a particularly gusty emergency tack when she had to take last minute avoiding action for a Loch Long calling water.

After an evening sampling the many delights of Aldeburgh, some well deserved sleep and a hearty breakfast, it was back down to the club for what should have been the third and final race of the series.  Sadly the tropical storm was still making its presence felt and although three of the keelboats did race, all the centreboard boats wisely made the decision not to risk it

as conditions were still fresh to frightening. We spent the morning drinking coffee and watching the few who did brave it careering around the river at max speed. Despite the weather it was an outstanding weekend and lovely to see so many classic dinghies and day boats in one place and to have the opportunity to chat to like minded sailors.

One of the nicest things was how many of the “BOD Fan Club” came up to cheer us on with Derick and Jenny Gentry, Barry and Jill Newman, Billy and Kate Button, Trevor & Ros Stone, Sue & Steve Merrill and Colin & Pam Willett all swinging by to say hello and Phil and Sarah Holding and Mark and Debbie Wilby bringing their RIB up to act as BOD support and official photo boat too. Thanks all of you – it made the event feel really special and we’re just sorry we couldn’t manage more racing to entertain you.

Our thanks to Derick Gentry and Mark Wilby for the photos in this report and to the Aldeburgh Yacht Club team for a lovely weekend.