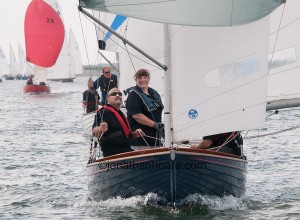 Notes – Although C50 was the first GRP BOD moulded, C51 was the first GRP boat to actually be launched. She was completed as the prototype glass fibre BOD for legendary Olympic and keelboat sailor Poul Richard Hoj-Jensen who worked closely with the class and John Mullins of the development of the GRP boats.  Paul sailed her in Holland for some years, sailing her for pleasure with family and friends.  She was purchased in late 2013 by Fiona Brown and returned to Brightlingsea where she is now an active fleet member.