Last night’s BOD dinner, hosted by Brightlingsea Sailing Club, was declared a resounding success by all in attendance.  The turnout was superb with 71 guests present for an evening which opened with drinks at 7pm, accompanied by Jonathan and Cheryl’s delightful string duet, included a wonderful three course meal cooked by Tanya Bines, a rousing and highly entertaining after dinner speech by Class Chairman Bob Richardson, a slide show of some of the best BOD photography of the last few years (thanks to Tim Bees, Jo Hearn, Mike Rees and Alex Button for their amazing images) and concluded with a lot of vitally important BOD talk late into the night. 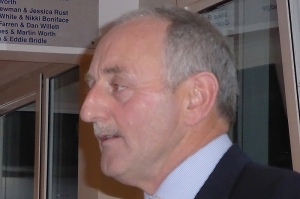 In his speech Bob paid tribute to Robbie Stone’s amazing design, to the friendly and inclusive nature of the class, which had warmly welcomed he and his crew and offered them endless help and advice, and to all the many volunteers who give up their time to run and promote the class.  In particular he highlighted the tireless work done by Malcolm Goodwin in bringing the class back from the brink of extinction a decade ago to the point where 20 boats were on the water for the 2013 President’s Race and we have a very real hope of 25 boats racing in the 2014 President’s Race.  He also thanked Alan Hicks and his team for the superb job they had done of organising the dinner.