A few months ago outgoing BODOA Chairman Adrian Gibbons received an unusual request from a lady in Paris.  She contacted him to say that she was looking for an unusual 90th birthday present for her father who loves classic boats and would it be possible to arrange for him to sail in a BOD.

Naturally Adrian said he would be delighted to set something up and so on 2nd May Adrian and BODOA Treasurer Dick Stephens found themselves sailing White Spirit with 90 year old Michael Connella in a day which proved to be a delight for all concerned. 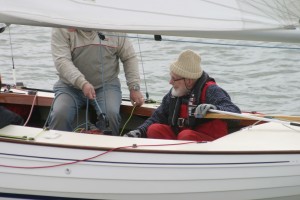 Michael had been in the Navy during the war and then farmed in the UK.  He eventually sold the farm and retrained as a maths teacher, ending up as the headmaster of one of the junior schools in Colchester.  He kept Adrian and Dick entertained with stories and proved to be a very efficient helmsman as they enjoyed a couple of hours sailing around the Colne and Brightlingsea and Pyefleet Creeks.

At one point Adrian, who has injured his knee and was a bit restricted in his movements around the boat, joked with Michael that he was as stiff in his joints as Michael at the age of 90.  Michael politely explained to Adrian that he is normally as fit as a fiddle and very flexible, but had spent the previous day digging his potatoes which was the only reason he was a bit achey!  Needless to say Adrian felt somewhat sheepish and has vowed to up his fitness programme!

The trio topped off their day with a lovely lunch back at the Colne Yacht Club and a great time was had by all.  The following day Michael’s daughter Lise made contact again to thank Adrian and Dick for organising the sail and to tell them that her father had had a marvellous time.

Happy 90th Birthday Michael from all the BOD Fleet – we hope to see you out in one of the boats again soon.

Our thanks to CYC Commodore Graham Chasney for the lovely photos.